How we conquered the chef freelance market in Russia. Purrweb’s case

Hello! I’m Kristina Spiridonova, an account manager at Purrweb. Using the example of talentum.app, a food-tech startup, I’ll explain how to automate business processes without ruining the effect of real communication.

Uber and Airbnb opened up new opportunities for auto fans and tenants, letting them earn money without intermediaries. The concept of freelance chefs came out too. It is promoted by the founders of talentum.app — a platform that allows you to choose a chef who will make food in their kitchen and deliver it to you.

Talentum.app didn’t have a dev-team. They received investments and had to implement the idea as soon as possible. Read on to know how our mobile app development helped the client scale up this startup idea  — fast and effectively.

How it initially worked

Formerly the project was called Cheflocal and everything worked manually. There was a chatbot that accepted orders, a manager in WhatsApp that found out clients’ preferences and requirements and arranged it. Then they manually looked for chefs who were ready to do the job and connected them to the client.

The manual payment and trust-based work:

Cheflocal was getting lots of orders, it was clear that the chosen business model had worked well. The founder decided to scale up and automate the process by introducing a mobile app. ‘VkusVill’, a fast-growing Russian retail chain offering fresh and healthy food, was impressed and invested capital into the project.

When we decided to develop a mobile app, we altered two things:

Chefs pay for the subscription and can sell ‘as much as they want’. Earlier, the revenue depended on turnover. Now the goal was to keep chefs in the app — as long as possible. To make that happen, we were to keep chefs satisfied with the partnership. I mean, chefs want to receive enough orders — and this depends on the number of users downloaded talentum.app (and how often they return to it). To retain users, we made the eye-catching and easy-to-use interface.

It was also important to automate in-app payment from the client to the chef. Just because this is convenient for both parties. At the UI/UX design stage, we designed the screens for payment. But when it came to development, it turned out that this feature didn’t fit the budget. That’s why we had to leave it behind.

Why the client chose us as a contractor

Initially, we were only to design the app. The client intended to hire a dev-team in-house and develop everything on his own. 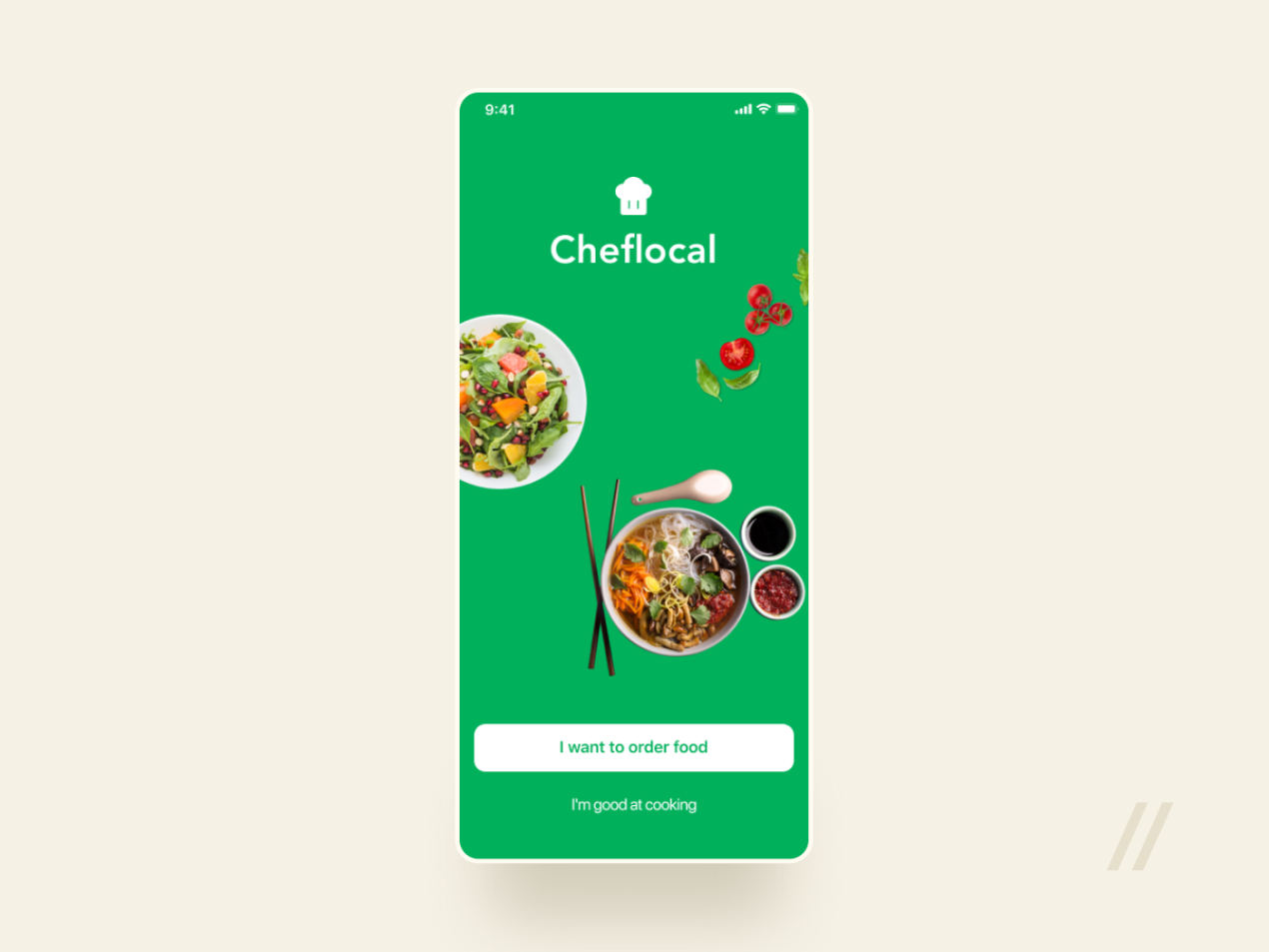 Originally, the project was called Cheflocal

However, VkusVill set very strict deadlines for MVP implementation. Talentum.app didn’t have time to search for an internal team: it’s a way too long process. It would have taken them at least a month (or even six) to get needed specialists on board, and they had less than two weeks. Our offer was within the budget. Besides, the client was highly satisfied with the results of our work at the UI/UX stage.

At the design stage, there were two additional factors:

We assumed that the client had an understanding of their targeted audience (insights) and an accurate vision of the problems at this stage.

The project team consisted of a project manager, a QA specialist, and three developers. The client gave us feedback and took active participation in the entire project: we regularly made calls, discussed problems, and provided intermediate results.

The client was sure their competitors failed because they focused on food, not people.  It was important to make it feel like communication with real people. The talentum.app was to keep the sense of it. We handled the task by:

Uber Eats and other services of this kind — these are implicit competitors. However, we did study them to find out core UX patterns. But our main objective was to examine human-centered apps: Tinder, Instagram, Badoo. I mean, apps where 90% of the interface was about people. In other words, we tried to avoid following the “food app” interface standards. 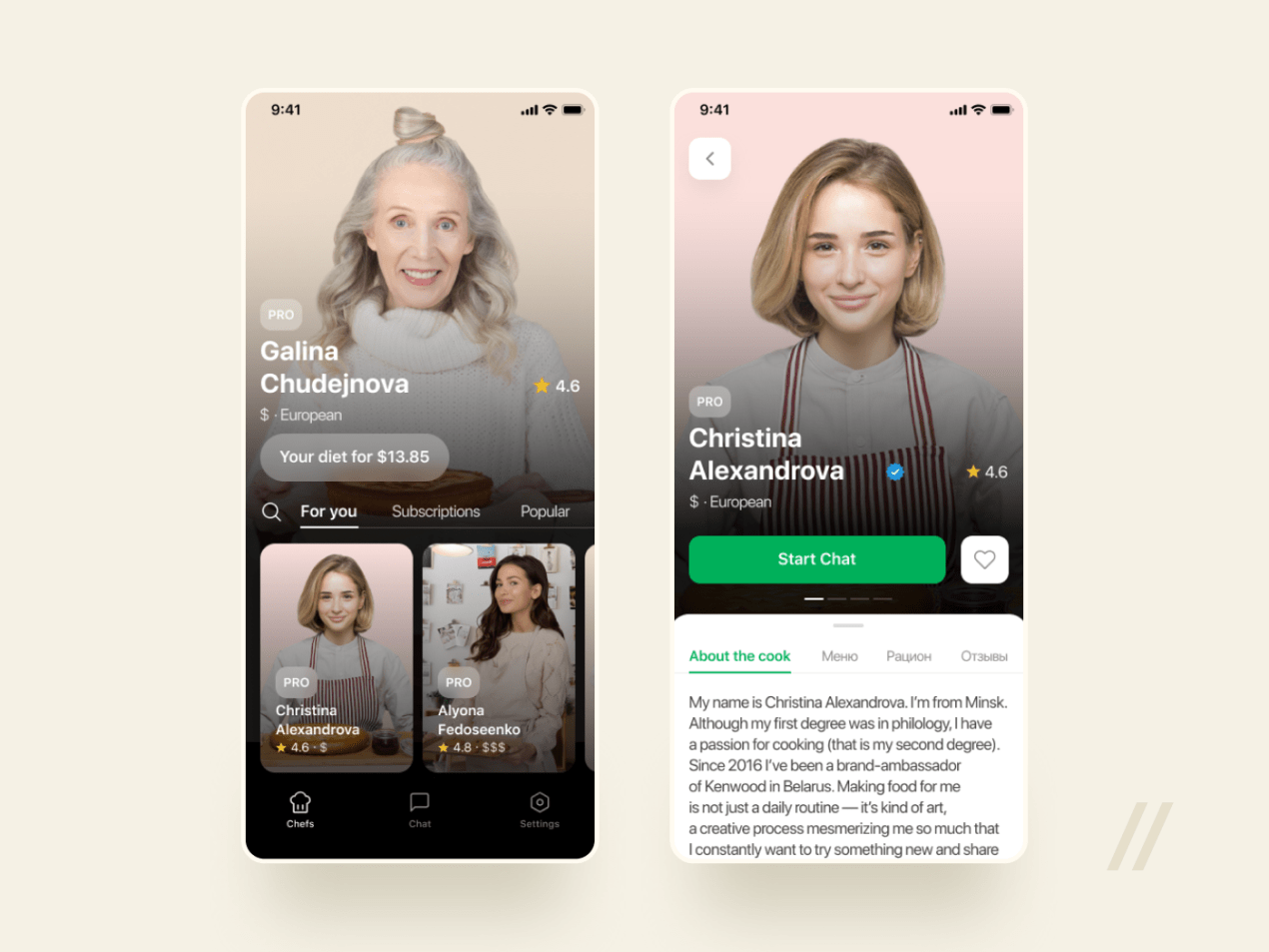 The app is focused on people, not food

It was challenging to create a catchy interface. We always want to do ‘something special’ for each project so it would be like a song you can’t get over. It may be an unusual UX pattern, UI element, or amusing transition animation. In this case, it’s the amazing chef search process.

The process wasn’t ideal though. We didn’t consider a guest mode that would help people get an idea of the app before registration. Having skipped it at the design stage, we had to painfully integrate it when the project was 80% done.

Also, there were some problems with the chat. To implement it, we tried using Apollo subscriptions instead of the classic web sockets. The result was, to say the least of it, not too good. Under heavy load on the chat, the backend dropped dead and the app stopped functioning. We struggled to find the problem for a long time. In the very end, however, we won. Could have done it faster if we hadn’t experimented with new technologies though. 🙂 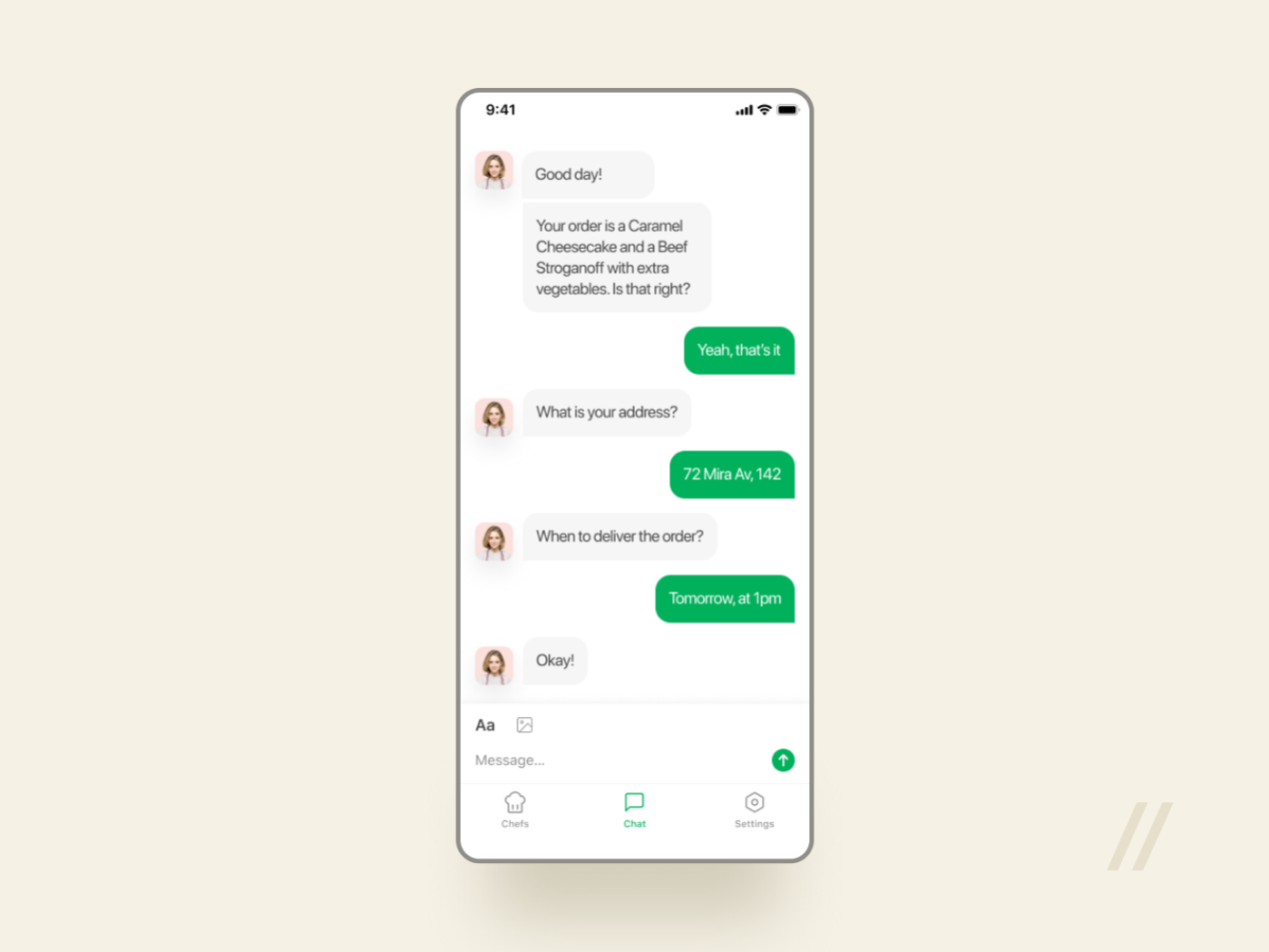 On top of that, VkusVIll leaned on our client: they initially gave 3 months to develop the entire app. We’re trying to manage it but had to take up another month — to fix the chat and integrate the guest mode.

At the moment, we handed the project over to the internal VkusVill team. It works steadily: more than 100 chefs have already registered in the app.

Business performance depends not only on our work but is also affected by marketing, competitors’ activity, and the date when restaurants are fully opened. We’ll see how many chefs buy and extend (or cancel) the subscription in the next 3-6 months. But we know that the app has great potential.