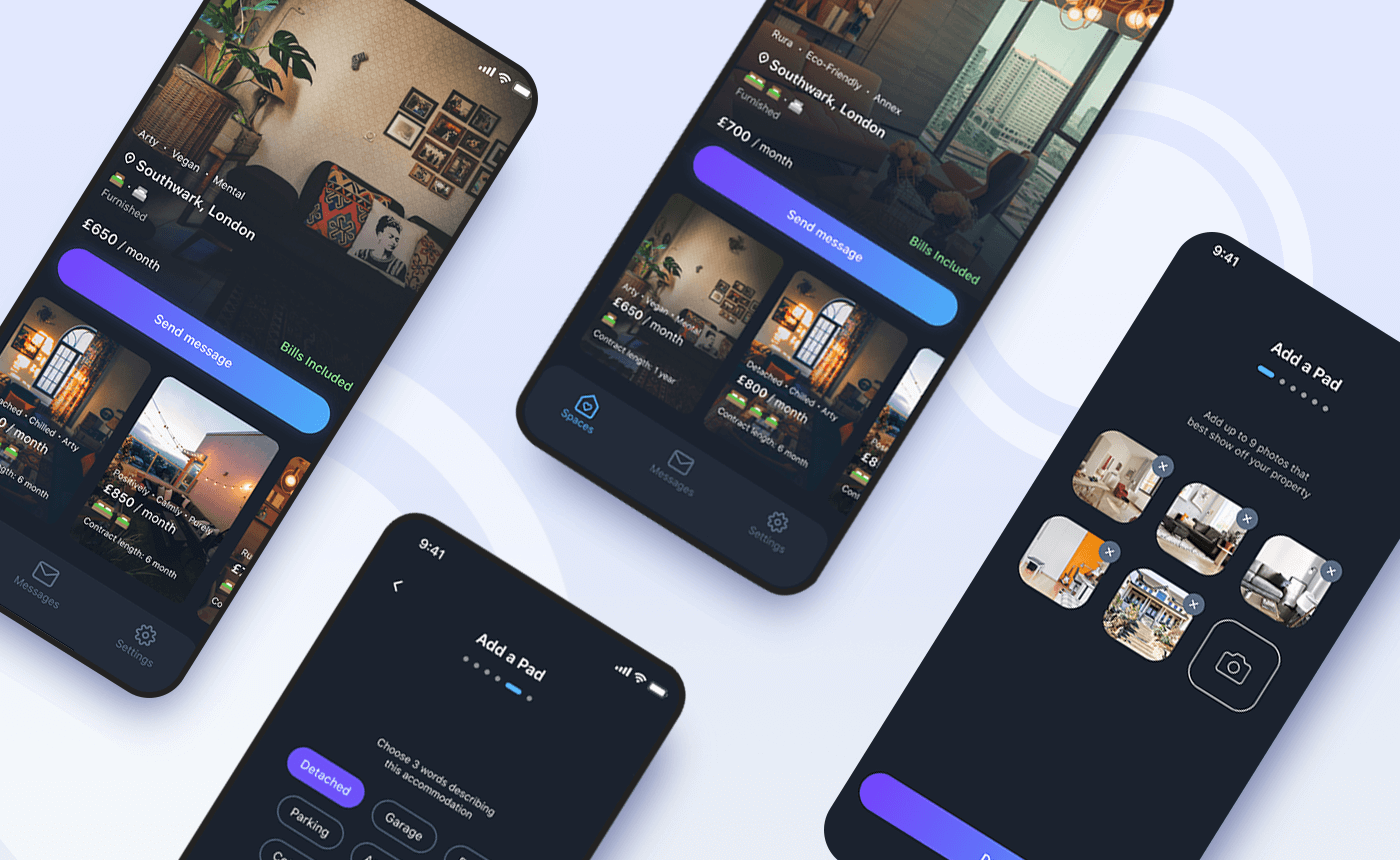 Investments are almost gone, and the product didn’t succeed: story of one Britain startup. Purrweb’s case

Hello! I’m Sergey Nikonenko, a COO at Purrweb. In this case, I’m going to tell you a dramatic story of one English startup in the Real Estate field. The guys spent 97% of received investments in vain and came to us with the leftover to develop a working app.

The original idea was to create a platform that would let users rent accommodation without any security deposits. Moreover, potential tenants would set the rental cost by themselves — and it’d be up to landlords to accept or decline the proposal.

The client received £850000 as investment from Velocity, and started working on the project by themselves (as their team could handle development). This way they managed to create a landing page, a Real Estate app, and splashed out £825000. Here comes ‘oops, something went wrong’: the product didn’t hit the market. The point is that they tried to enter the highly competitive industry without anything special. The service didn’t have a specific concept or a killer feature. The guys thought ‘no deposit’ would sound sexy for prospective users. Unfortunately, it didn’t work out.

After such a setback, they had many falling-outs within the team. As a result, the CEO and other participants gave up the project, leaving the CTO with the idea and only £25000. He decided to take the leftover and give the project another shot — thus, get one more tranche for further development.

READ MORE  How we conquered the chef freelance market in Russia. Purrweb's Case

The client came to us for UI/UX design of the app. Later on, however, he found out we can deal with development too. Besides, it emerged the tech stack we’re working with, matched the technologies his former team used to build the product — so we could scale it up. And we stepped up to real estate app development. What a perfect match!

Once the client realized the first version of Pad didn’t work out, he took a chance on pivot: changed the approach to solving the problem of the target audience. These were people who just moved on to the UK (to study, work, or live) and are looking for a place to stay. Although the client didn’t change the course — it’s still about searching for an accommodation — he decided to focus on flatshare.

London lacks affordable housing options, so the client thought the idea was promising. Unlike ‘classic’ property renting, this market isn’t extremely crowded. This is how the Pad app got its USP.

The client planned to get a project done before March — it’s time when the UK fiscal year ends, and people are ready to invest money in any more or less up-and-coming project due to 30% tax relief of the investment sum (people in the UK don’t want to give their money to the government too 🙂). However, it’s impossible to complete design and development within two months and the budget. We finished the Real Estate app in June. Let’s finally talk about it!

What Pad is about

For the moment, Pad is a platform that unites potential tenants or landlords who have a free room to rent for a long term.

In such a model, the user is interested not only in a room yet an owner of it too — after all, they’re gonna live together! And the owners want to know who is the person they will share their space with. The platform helps to deal with these matters and find an ideal match.

Features of the project

We ask a landlord and a tenant to answers three simple questions:

All of these are the questions clients get from real estate agents in London — we just took them as a guide. So, yes, Pad is more like a mini realtor.  🙂 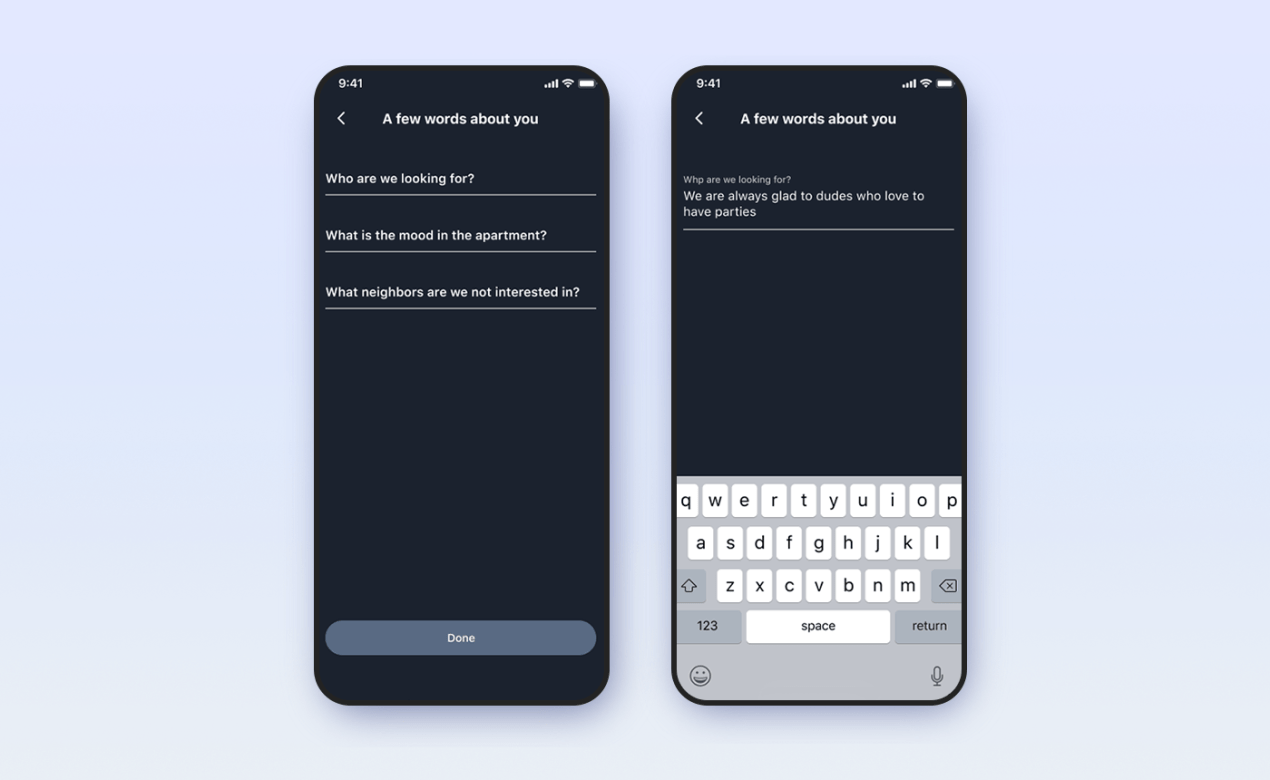 We also included standard characteristics for both roles — like political views, profession, bad habits (smoke, alcohol, or drugs). All users can manage the information in the personal account, and landlords can fill in an additional list, telling others what bonuses they have in their flats (TV, wi-fi) and what they allow. 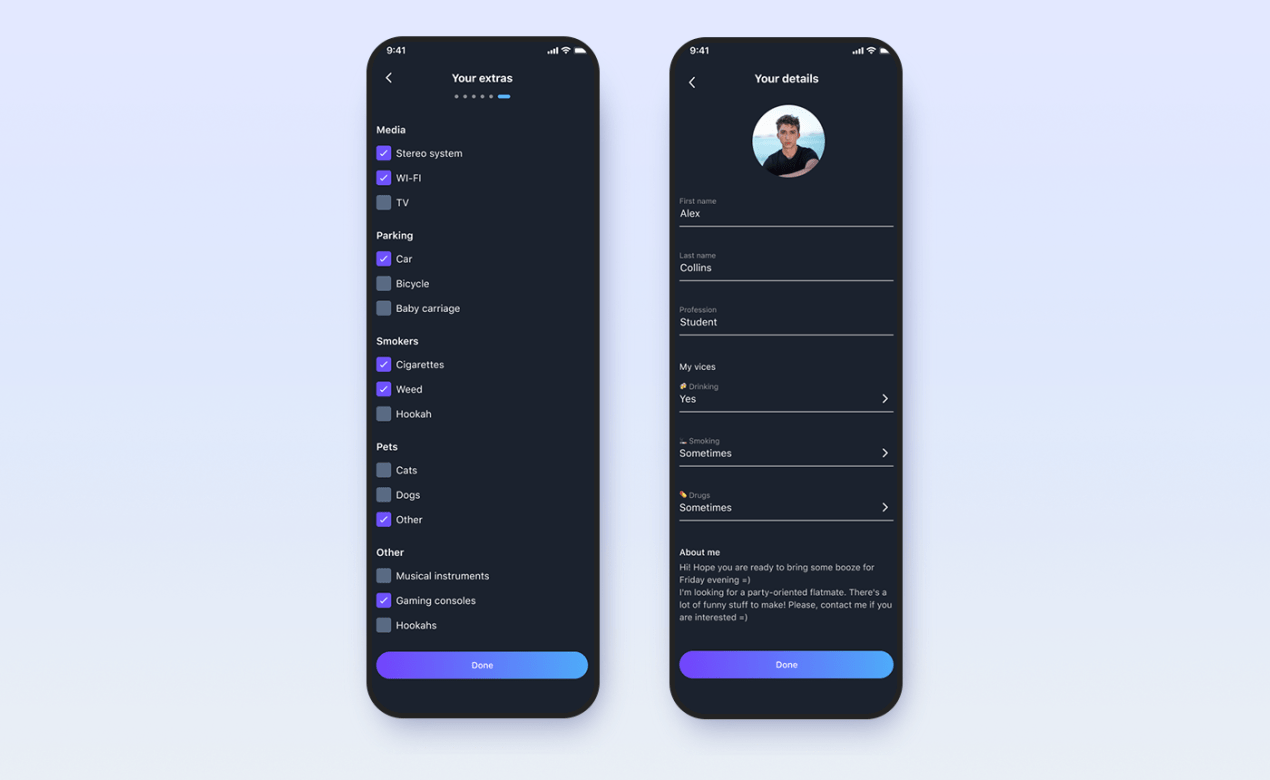 As a result, both roles can easily find a perfect neighbor.

How the app works

Pad doesn’t have any direct competitors. Yet there are many indirect ones: all of them are classic Real Estate apps that work as follows: you find an accommodation → you book time when you’re ready to look over → you give a look-over → you rent the accommodation. The same flow for each.

We offered an alternative. To make it out, tenants and landlords are to provide much information — this was the main headache when we worked on the design. We managed to handle it with the onboarding. Tenants got five supplementary screens, owners — eight. Yeah, that’s a huge onboarding but it allows users to fill in information at one go. Finish it once and enjoy! 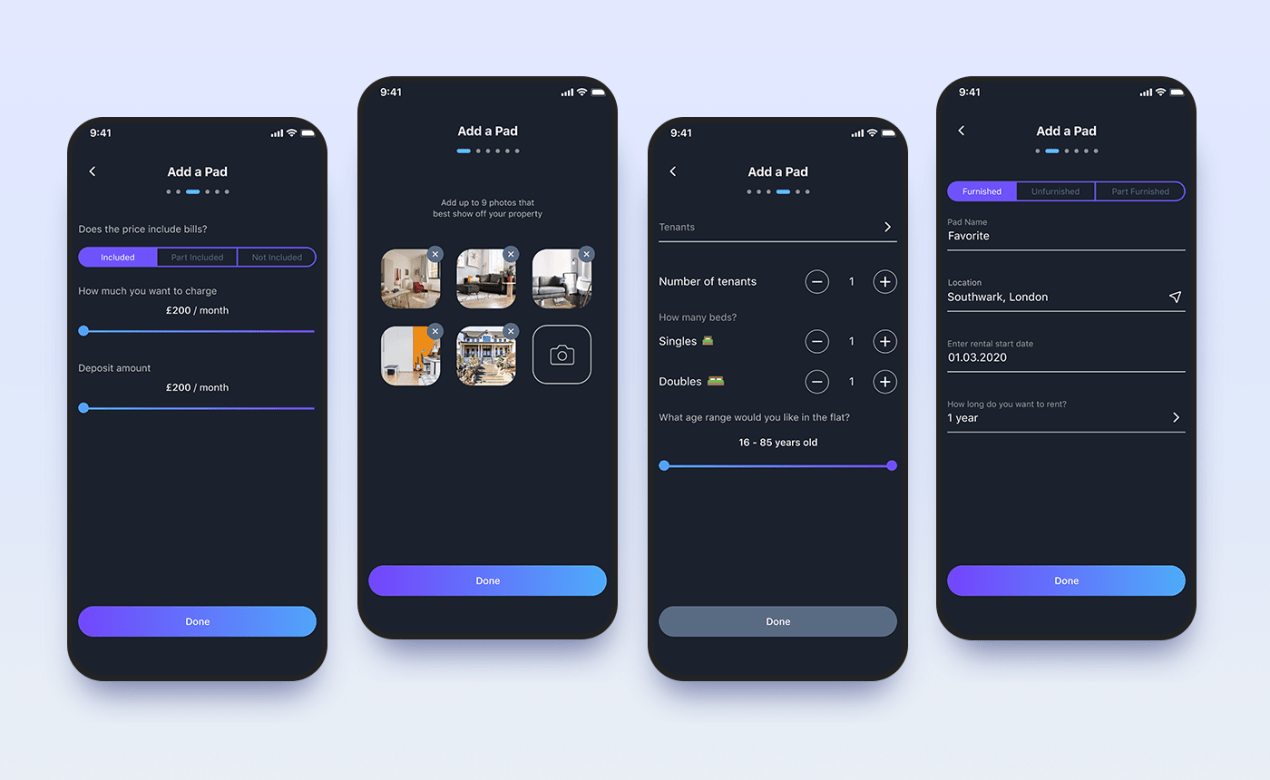 You might have noted that the primary interface colors are dark. Nope, it’s not a dark theme. Pad always looks like this.

Pad is the app that gives you an opportunity to find a person to hang out and spend a lot of time with in the evenings (let’s say it’s the most common scenario for students). The dark theme + dark accents = ideal. 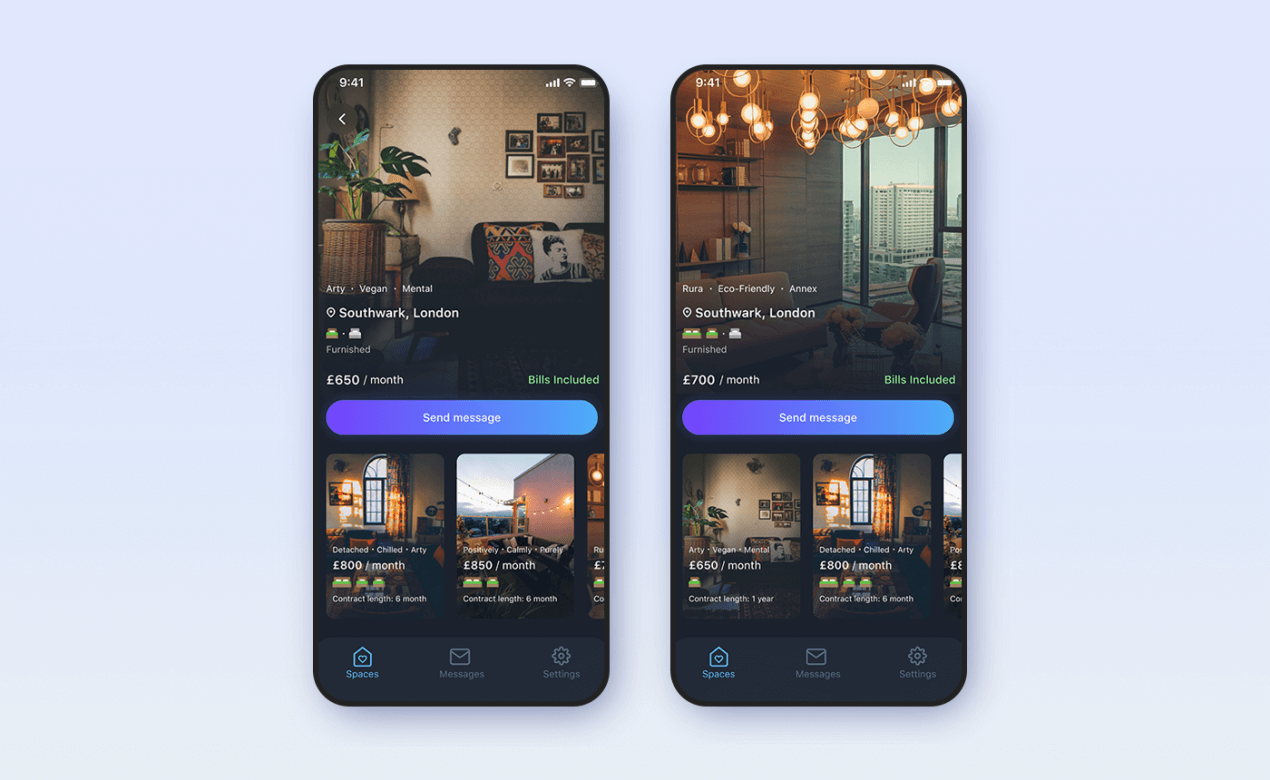 The feature set was determined by the client. He had many ideas and ‘want-tos’, we had to take on the role of a restrainer and explain what would and would not fit the budget.

Consequently, it was decided to delay integrating:

It was still about creating an MVP — the key task here was to build a working product and hit a market as soon as possible + remain within budget — so we had to avoid secondary features.

How the matching algorithm works

It’s quite simple. We have an accurate list of parameters: address, the number of beds, price range, and so on. We use them to start the search in ElasticSearch, a search engine. 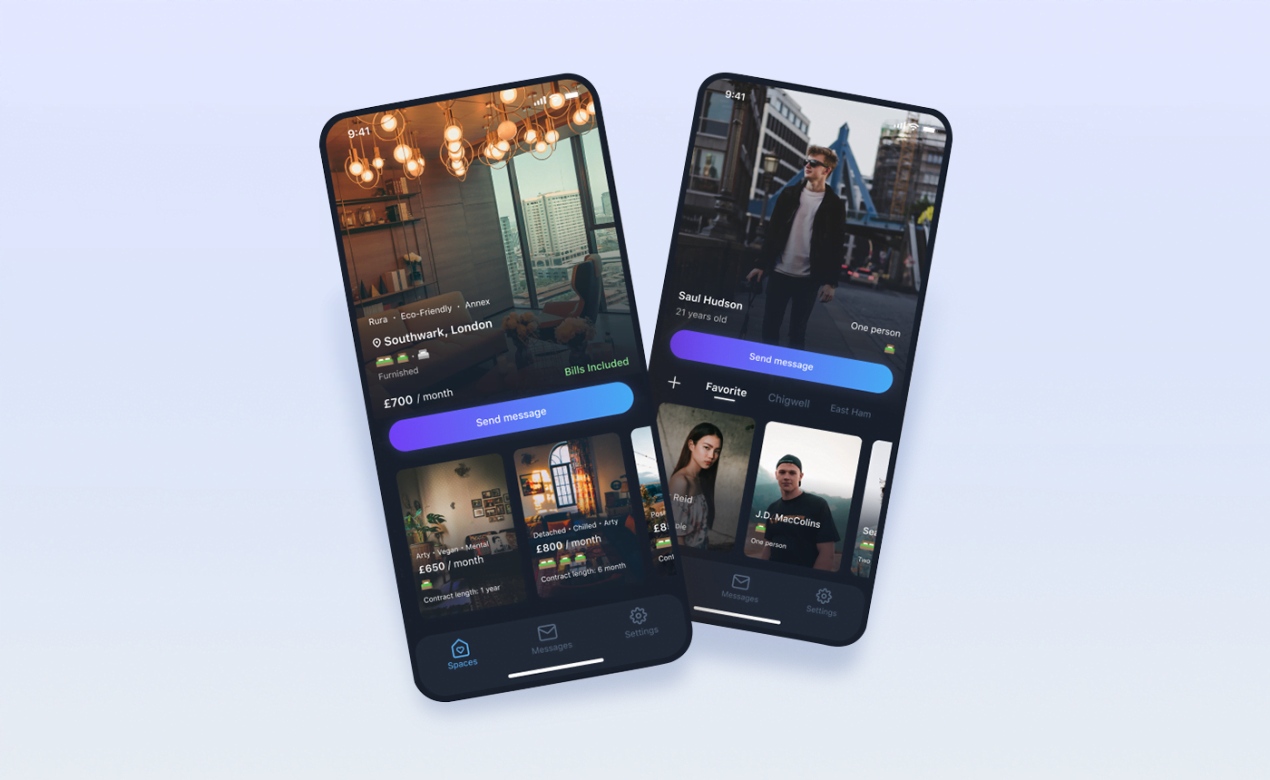 To develop a new version of Pad, we needed:

Generally, to deliver such a project the Purrweb team needs three months — it’s our USP. 🙂 It took us more with Pad since we hadn’t agreed on development. I mean, initially, we were to deal with UI/UX design, that’s it. Later on, when we decided to work together on the development too, which is, of course, a huge bunch of work, we went into high gear and almost hit our standard timelines.

Let’s go back to Pad. The client planned to attract some users and show the investors that the product is sought-after (thus, regain respect and earn trust). If went off flawlessly, he could receive another tranche of investments, set marketing, and complete the MVP.

For the client, the Real Estate app we developed is a perfect opportunity to enter a new negotiation stage with the investors. And he is extremely happy about this fact.

Although the app was submitted by the App Store and Google Play, it hasn’t been released yet — the client waits for the moment. Once we finish the landing page, however, we’ll push on the longed-for button.

The bottom line: do not give up — even if you run out of money, have poor results, and capitulated teammates. Your project can always be presented from an advantageous angle.

P.S. When moving to the UK, don’t forget to download Pad! The app will for sure be available on the stores.